In 2018, the Platform team at WePay integrated and released the first version of WePay’s internal gRPC ecosystem and toolchain to the WePay developers for a smooth migration from RESTful APIs to gRPC.

Shifting, adopting, and migrating large portions of a platform or infrastructure, such as adopting gRPC, has required establishing new standards and defining new processes that establish boundaries and guidelines. At WePay engineering, we are advocates of open source software, and we contribute back to the community as much as our internal use cases enable us to, but there are also components that need to be architected internally and specifically for the technology stack at hand.

In the case of gRPC, we had to implement processes along with a repository for how Protocol Buffers (ProtoBufs) are defined, stored, and distributed internally at WePay. For the purpose of this post, this repository is where digestible ProtoBuf definitions are stored, and consumed by different systems.

Back in 2018, based on how our developers collaborated on defining their private and common ProtoBufs, we decided to maintain a service-based ProtoBuf repository that would allow service owners to define their gRPC APIs. In addition, service owners were also allowed to use a common space in the repository to define ProtoBufs that may be used by other services in the same repository, e.g. address definition for users, or request/response structure for internal service APIs. In theory, these common definitions were owned by the service that created them, but were reusable by other service(s) that might be operating in a similar space in the infrastructure:

Code 1: A service-based ProtoBuf repository structure
with services and a single common package

This pattern started to become challenging over time, primarily with respect to ownership and purpose, and that’s what I’ll be talking about in this post.

At the very high level, there are some main ProtoBuf principles we use as reference:

These principles shape our ProtoBuf implementation and delivery pipeline: 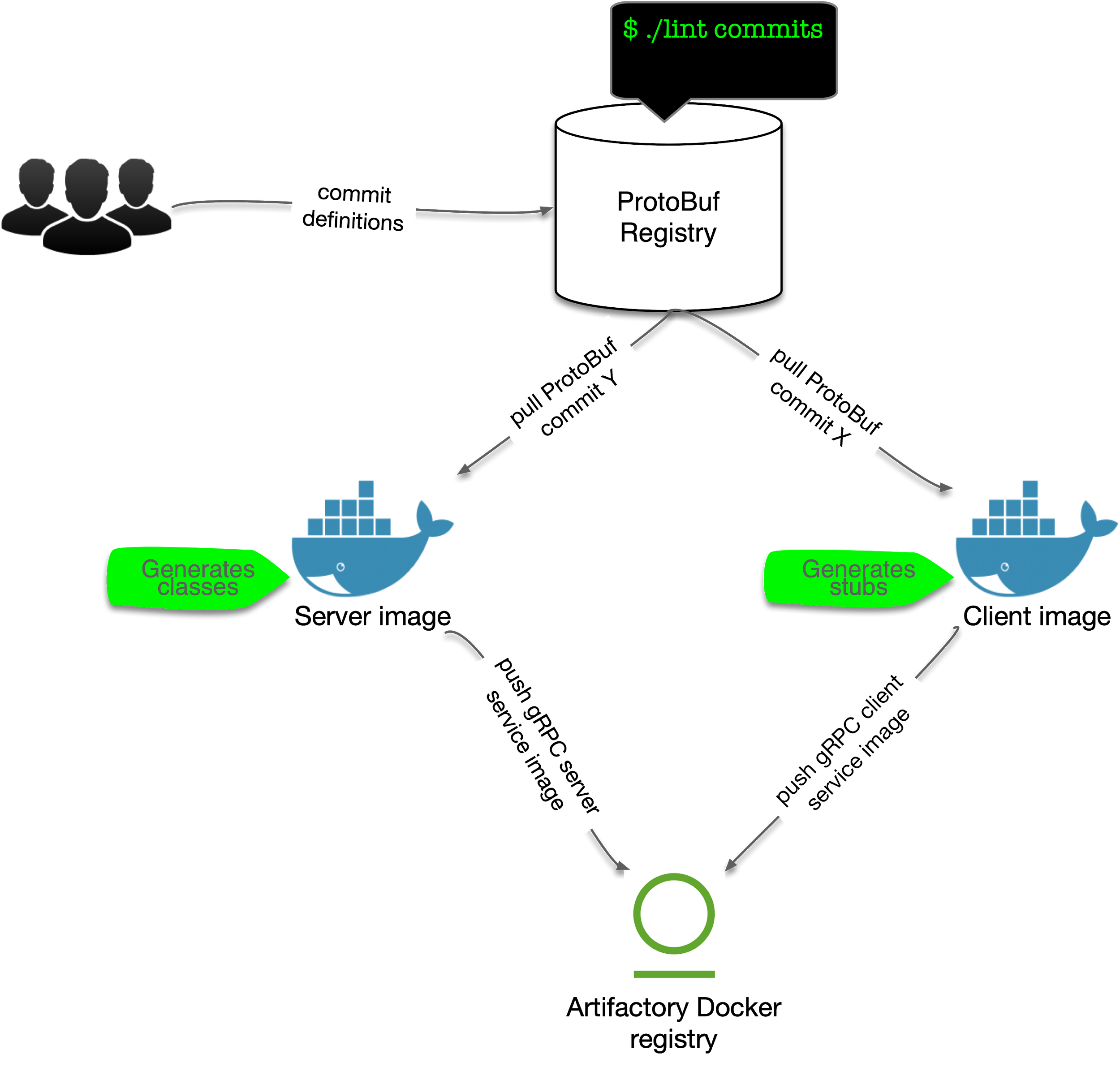 At WePay, ProtoBuf is primarily used for defining gRPC APIs and data used in the requests and responses in these APIs. I’ll talk more about how we’re expanding our use cases in a bit.

Figure 1 shows the high-level lifecycle of our ProtoBuf definitions from definition to consumption by the gRPC clients and servers. As mentioned in one of our previous posts, we use prototool to validate ProtoBuf changes that are proposed against our ProtoBuf repository. Once changes are validated, they are merged into the main, master, branch where client and server services pull them for ProtoBuf generation, stubs and/or classes, that are used in the final service images.

While we’ve benefited from defining our gRPC services in ProtoBuf, i.e. Code 1, it was difficult to use the same ProtoBuf repository for hosting other possible ProtoBuf use cases, e.g. migrating more complex JSON schemas, defining Kafka events (ported from Avro), etc, in additions to the pain points mentioned earlier around purpose and ownership.

From Flat to Purpose

In our experience, some of the main challenges with a service-based ProtoBuf repositories were:

Which, at a high level, translated to the need for:

Using these principles, the repository shaped into three base packages with three clear purposes:

At the root of Code 2, /type, /model, and /rpc packages store ProtoBuf definitions with their own clear purpose, ordered from the least (WePay primitive types) to most complexity. Each package builds on top of a lower complexity package to eventually expose a series of data as an API to other services in the infrastructure. Use cases like Kafka events follow the same principle, but instead of exposing an API, the events are defined in models, i.e. /model.

These packages provide WePay developers with:

In addition to these packages, the Well-Known ProtoBuf Types are also used across the repository for defining more fundamental fields. In theory, WPTs are very similar to WKTs in that both types build the foundation for all other ProtoBuf definitions, but WPTs are scoped to define payment specific types that can be used across the infrastructure, e.g. currency codes and card types or brands.

Using this dedicated hierarchy, we’ve been able to define the data flow between services with respect to business needs, allowing clear ownership over more complex and shared data definitions, while opening the door for other serialization formats to be migrated to ProtoBuf for a unified data serialization format across the infrastructure.

Another idea behind creating a purposeful ProtoBuf repository was that with the right guardrails and guidelines, creators of ProtoBuf definitions would be able to clearly define their ownership, and be automatically notified when there are proposed changes for what they own.

Code 3: Developers and their respective team
own their ProtoBuf definitions

This provides autonomy to the ProtoBuf definition creators, and automatically notifies them when changes are being proposed against their creation. This also promotes communication between teams developing in a similar space or in need of creating definitions for the entire WePay Engineering organization.

We think that by defining the principles mentioned in the beginning of this post and moving to the new purposeful ProtoBuf repository with full creator ownership, we’ve made developer onboarding to the ProtoBuf world simpler at WePay, while allowing for a better maintenance and coherent growth path for all the definitions stored in the repository. Additionally, this standardization has also made it simpler to provide polyglot tooling for all the systems that use ProtoBuf definitions at WePay; implementation to consumption.

We will continue to evolve this process as we migrate other use cases to it, and we will share more updates on this thread as we run into more interesting findings.